Was fortunate enough to experience some cultural humility and dementia care training yesterday back at OpenHouse.  I like the cultural humility ethos, but there were some differences between the way we work in the UK with those living with dementia and the tenet of the training.  Attendees were encouraged to say yes to all the demands and requests from the person with dementia, therapeutic (compassionate) lying appeared to be the norm and there was talk of offering hope in the face of the diagnosis.  Attendees were healthcare professionals who mostly worked in care home facilities from what I could gather, with a couple of exceptions.  Examples of residents not being told that their loved one had died and distraction appeared common.  Pretty interesting to note the different approaches.

Nice walk in the sun to the next appointment with the lovely Stu Maddux. Stu is a film maker and executive producer.  He produced a film called Gen Silent which was shown at the LGBT conference I attended in Melbourne on the first leg of my awfully big adventure.  Gen Silent is a beautiful film which talks of the concerns and anxieties of the LGBTI+ elders as they age.  Here is a link to the trailer – http://gensilent.com/   I would urge people with funding to watch it and find ways in which this film can be shown more broadly in the UK.

Stu works in the heart of Chinatown and generously offered to show me around while we chatted.  He explained that the water line used to be at the same level as this building!

Walking around San Francisco you can’t help but be in awe of the resourcefulness of those pioneers who decided to build here.  The Bay was bought under control so that they could build on it.  Apparently old ships were used to secure water lots in the age of the Gold Rush and so beneath the finance district there is a whole fleet of ships.  It’s weird to think that San Fran was little more than a small town in 1848.  My house back home was built in 1860 – we have a different sense of history, for sure.

Stu navigated us towards a tall building to ride to the 15th floor so we could take in the sights from a little-known patio.  I’m so grateful for the experience and definitely not one I would have had left to my own devices.  Stu has plans to make three further films, the first addressing loneliness and aging.  I’m hoping we get to meet again in the future.  We walked back to his offices in Chinatown and he wished me well and gave me a hug.  Not for the first time on my travels I realised that this was the first hug I had had since leaving home.  I walked away wondering how I would cope in isolation or in a care home which monitored and managed by intimate behaviour…

I wondered back through Chinatown and found the secret patio building again, this time taking photos of the views and the marketplace. 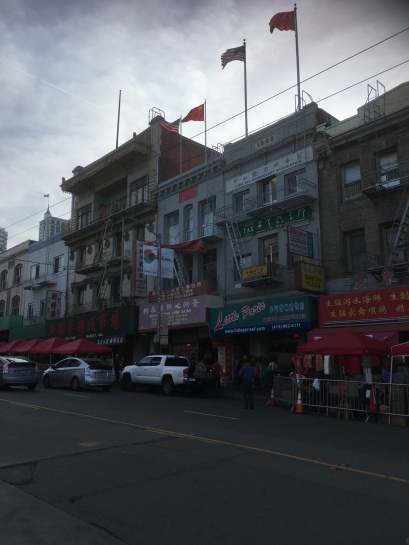 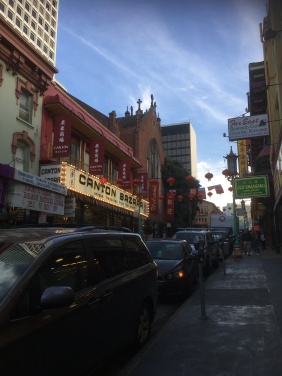 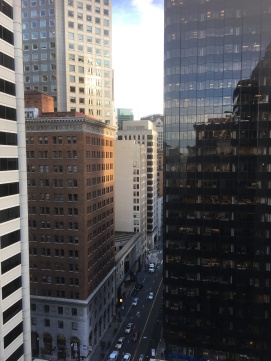 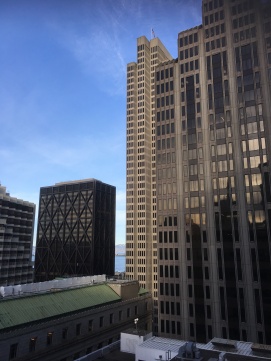 So that was that.  All the meetings are done, my brain is fizzing with the new knowledge and insights I have gained from this most duplicitous of places.  I have met with some genuinely lovely people and am now looking forward to Boston.  I’ve just had an email suggesting that we have a friendly chat over bagels and coffee before I get to meet all the people at the Fenway Institute.  I think I’m going to be just fine 🙂

View all posts by janeyouell

This is a text widget, which allows you to add text or HTML to your sidebar. You can use them to display text, links, images, HTML, or a combination of these. Edit them in the Widget section of the Customizer.
Loading Comments...
Comment
×
%d bloggers like this: